I met Kevin (not his real name) right here on this sidewalk, but with an additional 12″ of snow and in below-zero temperatures.  It was just a few days before Christmas 2013. My husband and I were eating in an adjacent restaurant and saw him sitting in there briefly, just staring at his hands. He was in pain from being cold. He had a look of loneliness that was haunting me as we ate. His jeans were soaking wet and so was his inadequate winter coat.

As we were leaving I asked the restaurant employees about him. They said he had been coming in and out all evening just to warm up. They said he could stay as long as he needed, but he would pop in and out for 10 minutes at a time. I sent him a silent prayer and we left.

As we were getting in the car, I saw him sitting on the sidewalk. I asked if he was okay and he just started crying. In Indianapolis, every person has a right to shelter when the temperature drops below freezing. He wasn’t aware of that and had no idea where to go. He had gotten into a fight with his brother where they both lived in a nearby rural county. He found his way to Indy that evening and didn’t know what else to do. He had money but couldn’t access it.

At this point it was irrelevant why he was out in the cold that night. He was going to die if he didn’t get inside. It was approaching 11 p.m. so pretty soon he’d have no where to go to warm up, except the hospital.

We called 2-1-1 and found a nearby men’s shelter that had capacity. As we drove to get him some hot coffee and then onto the shelter, we learned he is from Kansas City where my husband is from. He is a talented chef and had opened numerous high-end restaurants across the country. He was living in the same county where I’m from outside of Indy when he was kicked out of his brother’s home. The fact that our paths had crossed previously without us ever knowing it was not lost on me.

As we dropped him off, I gave him the $30 we had in our wallet and my cell phone number. He gave me one of the best hugs I’ve ever received, thanked me profusely, and cried huge tears of relief and gratitude. The fear and loneliness melted with each tear. His life had been spared that evening.

I never heard from Kevin after that. Whenever we walk downtown, I’m always looking for him. Not on the street, but walking to his restaurant job, doing what he’s great at. He taught me something so important I’ll never forget and I’d love to give him another hug and see how he’s doing.

I’m so grateful that our paths crossed that evening. Not because I saved him, or anything close to that. (Saving is God’s/the Universe’s work, not mine.) But I’m grateful because he reminds me that the struggle is real, every day, just for some people to stay alive. Kevin helps me keep it real. And that my role is to stay connected to others like him, and everyone who is hard to love—including myself.

Staying connected is hard work and requires our ability to both give and receive. How have you been touched by the graciousness of others or taken the time to really reach out to someone? 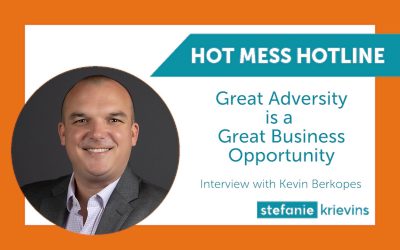 In this episode of the Hot Mess Hotline, CEO Kevin Berkopes talks about identifying when adversity is a business opportunity. Kevin’s company uses an innovative teaching model to make tutoring available for all children. He shares what it takes to challenge the status quo and take the heat that comes with it.

END_OF_DOCUMENT_TOKEN_TO_BE_REPLACED

How To Make Sense When The World’s A Hot Mess

Executive coach and founder of the Pro Troublemaker Nation Stefanie Krievins shares her thoughts on change, the change curve, how to overcome change management challenges and shares a new resource for leaders in this video.

END_OF_DOCUMENT_TOKEN_TO_BE_REPLACED

The World Deserves Your High-Quality Work

No more answering emails at 11pm! Our 24/7 contact culture is putting a real drain on our mental and emotional wellbeing. To give the world your best, you’ve got to give a little to yourself first. It’s the only way we can stay productive, focused, and happy. Just...